Stakeholders at the ongoing National Agency for the Control of AIDS (NACA), South-South Zonal Media Roundtable have advocated for greater responsiveness from the media to issues relating to HIV/AIDS in the country.

The Media Roundtable which is aimed at creating space for the media on emerging HIV/AIDS-related issues, priorities and trends; mutually reinforcing perspectives on the different dimensions of HIV response among partners in the South-South Zone; as well as development of a reference package for correct HIV/AIDS information is holding in Port Harcourt, the Rivers State capital.

Declaring the event open, the Chairman, House Committee on Health and Member representing Emohua Constituency in the Rivers State House of Assembly, Rt. Hon. Samuel Ogeh, who regretted the unfortunate relegation of other health issues to the background arising from the outbreak of COVID-19 pandemic, rather charged media practitioners to reawaken the people’s consciousness to the fact that HIV/AIDS is alarmingly increasing in the country.

The lawmaker lauded the initiative of the South-South Zone of NACA for organising the first-of-its-kind Media Roundtable for media practitioners and stakeholders in the HIV-AIDS-related field to interface and find common grounds in the fight against surging disease called AIDS.

READ ALSO: How Kogi State is handling the pandemic

The Health Committee Chairman assured the NACA team of his support and commitment to legislations that will continue to prioritise the health and wellness of the citizens and residents of the State. 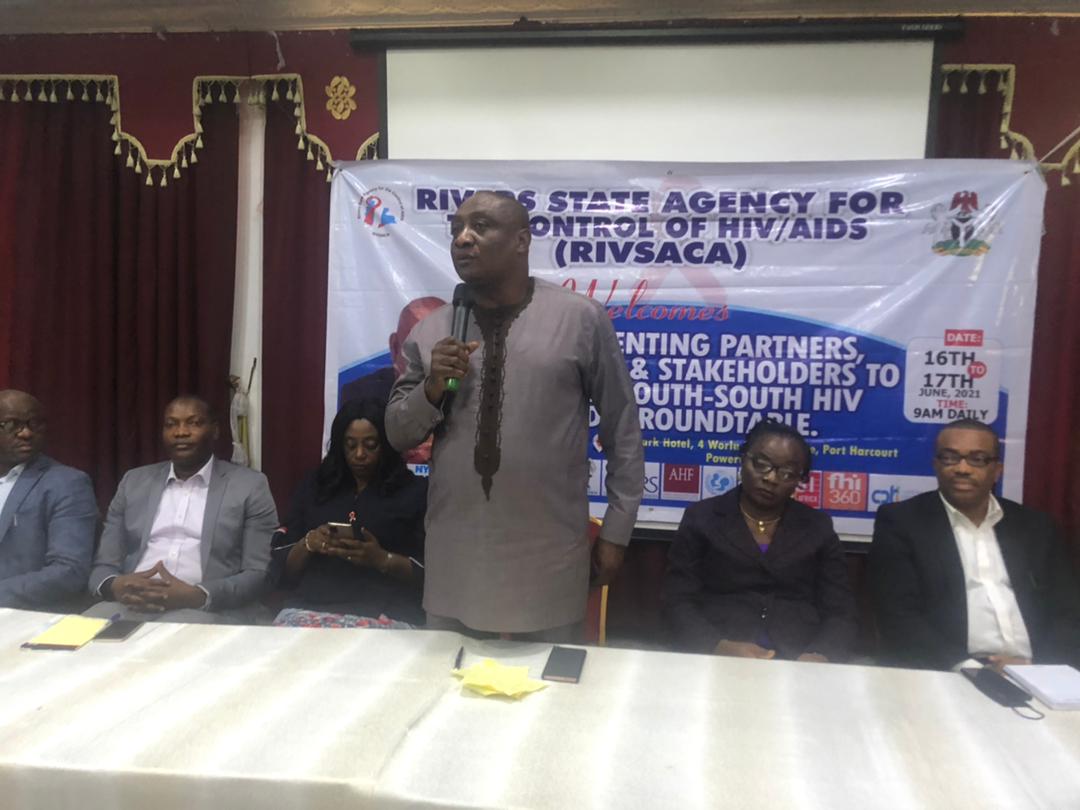 Buttressing on the need for media responsiveness, the Rivers State Commissioner for Information, Mr Paulinus Nsirim, represented by Mr Celestine Ogolo, insisted that the media must continue to exert its influential efforts in agenda-setting and drawing the government’s attention to critical areas of need, especially in the fight against HIV and AIDS.

The Commissioner, who also decried the negligible attention to other health issues since the outbreak of the Coronavirus pandemic, however, hoped that the HIV Media Roundtable will deepen collaboration and enhance the course for an HIV-free Nigeria.

He also hoped that the abundant media presence in the State and its media-friendly environment will encourage and reawaken discourse on the pertinence to track down the escalating rate of HIV and AIDS in the country. 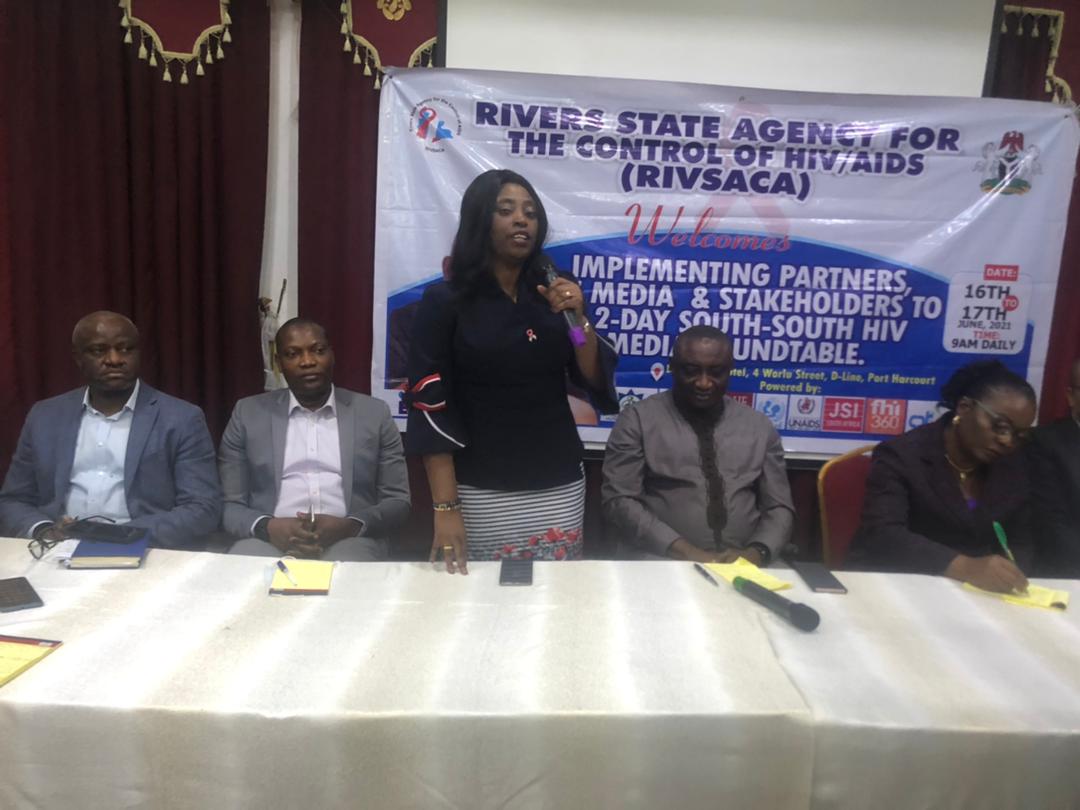 Also speaking, the Rivers State Head of Service, Barrister Godwin Rufus, represented by Mrs I. S. Brown stated that with zero tolerance to discrimination and stigmatization against people living with HIV/AIDS, the State Civil Service is open to greater awareness creation for workers in the State to better manage their health and prevent the spread of the disease.

The Head of Service assured of his office’s preparedness to partner with relevant stakeholders to strengthen the determination to hound the prevalence of HIV AIDS in the country.

Earlier in her opening remarks, NACA’s South-South Zonal Coordinator, Dr Uduak Daniel pointed out that the inglorious position of the South-South region in terms of HIV/AIDS prevalence rate in the country has made the partnership with the media a necessity, given the media’s all-important role in awareness creation and information dissemination, as well as its heterogeneity of reach.

Highlighting the importance of the media, Dr Daniel hinted: “The South-South Zone has put in place a Strategic Media Engagement Process, where its first activity (a media training), in February 2021, birthed the HIV Media Advocacy Platform both at the State and Zonal levels.”

While appreciating the implementing partners, the NACA Zonal Coordinator averred that the platform intends to keep the media abreast of information about HIV, especially amidst competing for health issues surrounding the nation.

Speaking further, she said among the series was also the HIV Media Advocacy and Social and Behaviour Change Communication training, where media practitioners and other stakeholders were trained on health communication and behavioural change strategies targeted at tipping points for change. “This Roundtable now is so that the journalists and programmers can parley and ventilate and at the end of the day come out with a reference material that would aid the understanding of HIV and AIDS awareness/reporting in the zone, nay Nigeria,” she quipped.

In his welcome address, the Acting Executive Director, Rivers State Action Against AIDS, Dr George Waeke, represented by Dr Francis Naaziga, lauded the initiative of the South-South Zone Media Advocacy team for the novel HIV Media Roundtable, which he remarked, will “create an enriching space for implementers to acquaint the media and other stakeholders with their projects in the zone, priority areas such as HIV testing services, HIV self-testing, pre-exposure, stigma, discrimination, as well as demand creation for the uptake of these services among priority populations.”

He maintained that the occasion is well-deserving and accords Rivers State the platform to showcase the enormous successes recorded in HIV response.

“We, therefore, look forward to the media to vigorously frame proper messages for increased uptake of available HIV services in the South-South States, stigma reduction and strengthened mutuality between the government, implementing partners and the media,” he concluded.

The event also enjoyed goodwill messages from implementing partners and media practitioners, all committing to a course for halting the spread of AIDS in Nigeria.

High points of the meeting were high-octane discussions on the nitty-gritty of HIV and AIDS, advocacy action points, and networking for a strengthened awareness on the fight against HIV and AIDS.