According to a recent post on Weibo, Xiaomi is working on three smartphone models in the Redmi K50 series. All three phones will basically differ in terms of camera, charging speed and the chipset used. We recently covered a report on Redmi K50 Pro+ specs. The Weibo tipster adds that the Redmi K50 Pro+ features an AMOLED E5 panel with a whopping 120W fast charging speed. The upcoming flagship will also have a 100MP (possibly 108MP) primary camera lens. 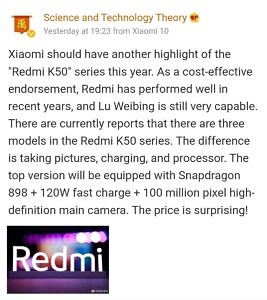 All of these phones could come by the year-end or early next year in China with a global and Indian launch to follow soon. We will have more information about the devices in the upcoming months.

Windows 11 compatibility: How to check if your computer meets Microsoft’s requirements