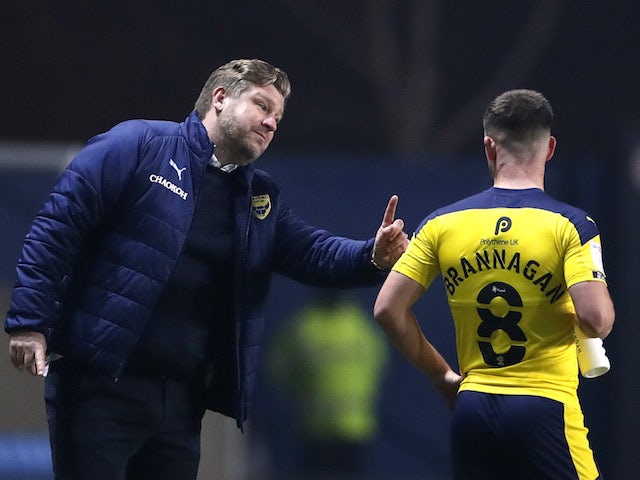 Oxford United‘s clash with Fleetwood Town looks set to go ahead despite the home side’s troubles with a COVID-19 outbreak at the weekend, with the hosts potentially missing a number of players at the Kassam Stadium on Tuesday evening.

Oxford’s trip to Wigan Athletic on Saturday was postponed just hours before kickoff as a result of positive test results, whilst the visitors were in action but fell to a dramatic late defeat in a Lancashire derby.

Oxford boss Karl Robinson is optimistic that his side will be able to fulfill their meeting with Fleetwood on Tuesday, after having to call off their trip to Wigan on Saturday morning.

Seven players and a couple of staff members tested positive for COVID-19, but despite late efforts to bring in some emergency loan signings, the U’s had no choice but to request a postponement after consultation with Wigan and the EFL.

However, subject to tests results on Monday, Robinson must prepare his potentially-depleted side for the welcoming of struggling Fleetwood to the Kassam Stadium on Tuesday.

As a result of not playing at the weekend, Oxford dropped out of the League One playoff places and find themselves in eighth place heading into the midweek fixture, after a strong start to the season in their hunt for promotion to the Championship.

Robinson’s side have performed well in the third tier once more in these early stages, and have not suffered a hangover from their disappointments of a failed playoff campaign last season, with a strong home record proving vital so far.

Despite three winless games across three different competitions in their last outings, Oxford remain in strong form, with just one defeat in their last eight league fixtures, which came against top-of-the-table Plymouth Argyle, and who remain the only side to beat the U’s in front of their own supporters in League One this season.

Meanwhile, Fleetwood did return to League One action at the weekend after a near three-week break from domestic football, but were on the wrong end of a 2-1 scoreline against Lancashire rivals Morecambe.

The finish to the game seemingly summed up the disappointing start to the campaign for the Cod Army, with Simon Grayson‘s side on the receiving end of a potential goal-of-the-season contender from Morecambe’s Cole Stockton.

Stockton beat Town goalkeeper Alex Cairns from inside his own half in the fourth minute of second-half stoppage time, just as Fleetwood were pushing for a late winner themselves.

To make matters worse for Grayson, substitute Anthony Pilkington could not control his emotions and saw red in the last action of the defeat to add to their misery.

Callum Johnson‘s equaliser eights minutes from normal time had given Fleetwood hope of earning three points but the dramatic sensational strike from Stockton condemned them to their fourth-straight loss across all competitions, as well as their sixth in their last seven overall.

As a result, the dreadful run of form leaves Town in 22nd place heading into Tuesday’s trip to Oxford, and three points off safety despite the expectations of a comfortable season in League One.

However, were their hosts on Tuesday to be without a number of players due to their COVID-19 outbreak, there will not be many greater opportunities for Grayson and his side to kick start their campaign with a vital win.

Oxford are due to test their players again when they return to the training ground on Monday, with the results of those determining the severity of their absentees list ahead of Tuesday’s fixture.

John Mousinho, Jordan Thorniley, Elliott Moore, Mark Sykes, Simon Eastwood, Matty Taylor and Anthony Forde were the seven players named as testing positive for the virus on Saturday morning, so their availability remains to be seen.

With Eastwood potentially remaining absent, Oxford will require to bring in a goalkeeper on emergency loan for the game to go ahead, with the other two choices – Jack Stevens and Kie Plumley – suffering from glandular fever and isolating respectively.

As for Fleetwood, Pilkington will be unavailable due to his red late card against Morecambe at the weekend.

His absence adds to the injury problems that Grayson has had to deal with all season, which includes the season-ending injuries of Brad Halliday and Darnell Johnson.

James Hill looks set to remain out for another couple of weeks as well after picking up an injury on international duty, but Fleetwood did manage to welcome back Harrison Holgate on Saturday after a three-month absence.

The outcome of this one highly depends on the number of absentees that Oxford will be suffering from, but considering the possibility that they will remain without a few of their first-team players at least, we are predicting Fleetwood to pick up at least a point here.

Oxford would normally be the favourites for a comfortable win against struggling opponents in this one, but their troubling situation presents Fleetwood with the chance to pick up a vital draw or victory.

Our expert tipster partners at Sporita.com are predicting under 3.5 goals in this match. Click here to find out what else they are predicting for this game and for more of their tried-and-tested football tips.Under 3.5:data
ID:470793:1false2false3false:QQ:: from db desktop :LenBod:collect12877:

Click here to get Sports Mole‘s daily email of previews and predictions for every major game!
Source: | This article originally belongs to Sportsmole.co.uk

Insomnia Not Associated With Migraine and Tension Headache Diagnoses

Restaurant owners forced to CLOSE because too many staff are isolating

Rand Paul calls for Fauci’s firing over ‘lack of judgment’

Do We Need A New COVID-19 Vaccine Amid The War Against The Delta Variant?

NFL wide receiver steps away from football for ‘mental wellbeing’