OnePlus 9 RT is expected to launch sometime later this month and it will come as a successor to the OnePlus 9R from earlier this year. The brand is also reportedly prepping a new Joint special edition for China. Now, noted tipster Digital Chat Station has revealed some key specifications, which reiterate some of the previous leaks. Interestingly, the tipster claims the phone will launch with an Android 11-based ColorOS 12 system out of the box. The brand had rolled out Android 12 with OxygenOS skin to its flagships for users in India. 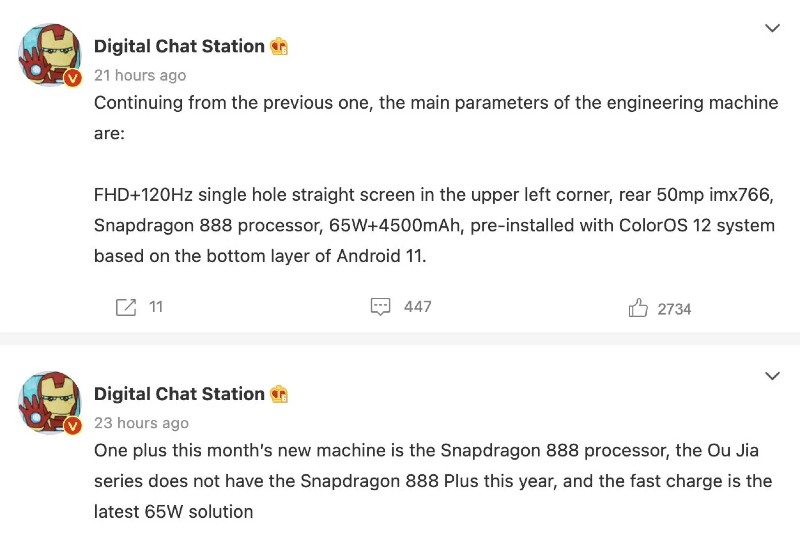 According to Digital Chat Station, the phone is said to come with a 4,500mAh battery, which is similar battery capacity as the 9R. The phone will support 65W fast charging support and sport an FHD+ display with a 120Hz refresh rate, punch-hole cutout, and flat bezels. The OnePlus 9 RT is said to be powered by the Snapdragon 888, which should be an upgrade from the OnePlus 9R that had the Snapdragon 870 chipset. This falls in line with a recent Geekbench listing.

The phone is likely to feature a 50MP Sony IMX766 sensor and will be paired with an 8MP ultra-wide-angle camera and a 2MP macro/monochrome sensor. Most of these specifications are already leaked via earlier rumours but the latest revelation from DigitalChatStation reiterates the same. Earlier reports have mentioned it would come with a 6.55-inch FHD+ AMOLED display with 2,400 X 1,080 pixels resolution and Corning Gorilla Glass layer on top.

The phone will be equipped with NFC, an in-display fingerprint sensor, dual stereo speakers, and an X-axis vibration motor. It is expected to sport a 16MP snapper on the front for selfies and video chats. Connectivity features include 5G, 4G LTE, Wi-Fi 6, Bluetooth 5.2, GPS, and a USB Type-C port. It is tipped to pack up to 12GB LPDDR4X RAM, and 256GB UFS 3.1 internal storage.

Ben Simmons’ next move? Nobody at the Philly Sixers seems to know

Euro 2020: Kevin de Bruyne reveals he may not fully recover from injury for up to SIX MONTHS