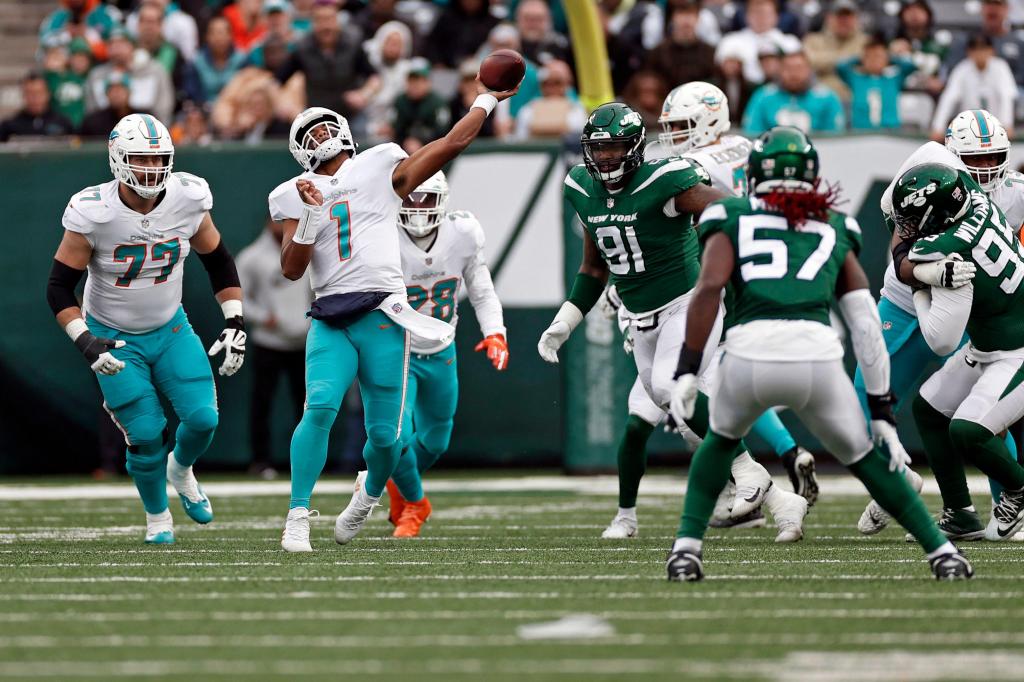 Time to suck up your pride, pack away your standards and expectations, and understand it likely won’t get much better than this.

At least not this season for this Miami Dolphins offense. Not with a terrible offensive line, this platoon of scatbacks, and this group of injury-plagued receivers.

Sunday’s 24-17 win over the New York Jets, which extended Miami’s winning streak to three games, is likely the best this offense can do.

Let’s hope it’s not. But let’s also come to terms with what we’re seeing.

Miami faced the NFL’s worst scoring defense coming into the game and produced the best offensive output of its season — 388 net yards, 8 of 14 on third downs, 2 of 4 in the red zone, 2 of 2 in goals-to-go situations — without needing any overtime scores and defensive assistance.

The Dolphins scored the NFL average of 24 points on Sunday — which is a major milestone for a team that came into the contest averaging 17 points.

What should be encouraging is that this can be the norm. At least it should.

Quarterback Tua Tagovailoa — broken finger and all — delivered a 108.7 passer rating after completing 27-of-33 attempts for 273 yards with two touchdowns and one interception.

He was efficient, like he’s been most of the season with the exception of the two losses to Buffalo.

Miami’s offensive line didn’t allow a sack for the second time all season. Tagovailoa was under a ton of pressure — as usual — but he found a way to evade every sack but one, and that was negated by a penalty.

Miami’s offensive line also paved the way for 115 rushing yards and one score on 33 carries, and the offense gobbled up time of possession in the fourth quarter, putting together a 12-play, 45-yard scoring drive that made 6:53 in game time evaporate, leaving the Jets 1:57 in the fourth quarter to close a 10-point deficit.

And Tagovailoa and Mack Hollins connected on a 65-yard touchdown pass, one where Tagovailoa had to evade pressure to find Hollins, who was his second read.

That 65-yard pass, which Hollins had to turn around to get after slipping past the Jets entire defense, was the longest of the season and Tagovailoa’s young career.

Tagovailoa put everything he had into that throw, which traveled 50-yards in the air, and it should remind the league that if their defenses get caught slipping these Dolphins can make them pay deep.

That hasn’t always been the case this season, but having a healthy Tagovailoa, who improved his career record to 8-7 as an NFL starter, gives this team a chance because of the efficiency he plays with when running the run-pass-option offense.

“I think he’s getting better every time he steps out on the field. I think he made a lot of good decisions today. I thought we moved the ball pretty efficiently, especially in the second half,” coach Brian Flores said. “Those drives in the second half are big drives, and I think we answered their score with a score and then we were able to go up two scores with the next drive. Tua is leading the way from that standpoint, so I think he’s playing well.”

Tagovailoa’s knack for throwing accurate passes and getting the ball out his hands quickly gives this team a chance to rebound from its 1-7 start.

But how good can the Dolphins be with him as a starting quarterback?

There is no telling right now because the support system around him isn’t good enough.

That’s evident from this season’s struggles, but Tagovailoa’s development and progression are reasons Dolphins fans should still have hope and continue watching.

I’ve liked Tagovailoa since his Alabama days because of the efficiency he played with, and the fact he showcased that he had the “it” factor in college, when he was leading Alabama to national championship games.

But the NFL is a different animal, a more complicated beast to tame, and Tagovailoa is learning that.

“It’s always dependent on what the defense runs and what kind of coordinator it is, so it’s different. At Alabama you just knew where the guys lined up and you just go out there and play,” said Tagovailoa, who produced the third game-winning drive of his career in the fourth quarter when a 5-yard touchdown pass to Myles Gaskin gave Miami a 21-14 lead. “Whereas in the NFL, you have to know what everyone is doing, the protection, where you’re hot, we could go on forever about that.”

Only time and patience will tell us what type of quarterback Tagovailoa is destined to be — limited arm and all.

But Sunday’s game shows that if the Dolphins can provide him solid protection, and the offense can produce a rushing attack, he can give this team a chance to win — and that’s a good starting point for a rebuilding franchise.

Karate Child musical on the way in which: Wax on, wax off, with jazz arms – CNET

World’s largest trade deal will come into force in January. The U.S. won’t be part of it

Citigroup to make 100 roles focused on digital assets including blockchain

Federal Reserve will begin tapering: What does that mean for mortgage interest rates?