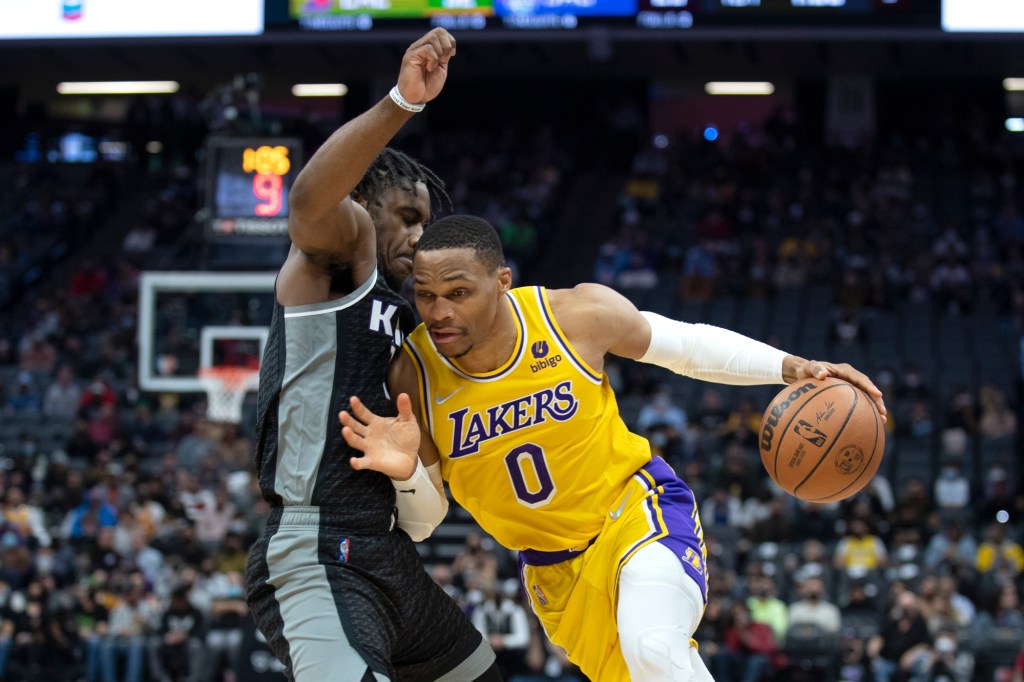 After weeks of build-up, the Lakers’ opponents aren’t just saying the quiet part out loud – they’re blaring it from the rafters.

When Russell Westbrook missed a shot on Wednesday night at the Golden 1 Center, the Sacramento Kings’ game operations staff was quick to pounce: They played a clip of Foreigner’s “Cold As Ice” to mock him. And throughout the night, Westbrook gave them plenty of reason to replay the clip.

Westbrook wasn’t the only Laker who struggled in a 125-116 loss to the Kings, but he had a look at the last meaningful shot of the game – an open look at the 3-point line – and missed it with 1:07 left with the margin at four points. It was the last of his 12 missed shots, an undeniable low point for Westbrook, whose shooting has been subpar for weeks.

There was plenty of blame to go around, however, as the Lakers (21-21) sunk back to .500: Their defense couldn’t contain the Kings’ breakneck attack and allowed them into the paint. Sacramento shot better than 55% overall, led by De’Aaron Fox’s 29 points, and the Kings scored a staggering 70 points in the paint.

“Our defense let us down for the second game in a row,” Coach Frank Vogel said.

Even LeBron James, who led the scoring effort with 34 points, had his issues on offense: He was just 13 for 29 from the field, including a 3-for-12 mark from 3-point range. The Lakers’ best individual bright spots were Malik Monk, who made six 3-pointers on his way to 22 points, and Austin Reaves who had a career-best 19 points.

All three were a factor as the Lakers whittled a late deficit from 13 points to two with just 1:36 left. Reaves hit a pull-up, then the Lakers did something they weren’t able to get all night: defensive stops. Monk blocked a shot that led to a James layup, then James earned a strip that led to a Monk layup. The perfect ingredients for a comeback seemed ahead of them when James rebounded a miss by Harrison Barnes (23 points) and took it coast-to-coast for a fastbreak layup.

Fox put the brakes on the rally with a jumper in the lane seconds later. Then Westbrook took his open look with just over a minute left, but his fifth 3-point attempt clanked out like all the others. Chemezie Metu (14 points) locked up the win with a 3-pointer when Sacramento barrelled back down the floor.

Arguably, the fourth quarter wasn’t even the one that cost the Lakers a chance to take the season series edge on the Kings. They were outscored 40-23 in the third – a reminder of some of their early-season struggles to compete out of halftime.

For long stretches in the first half, the Lakers looked reasonably in control. That sense of confidence peaked in the second quarter, when Monk (who made his first four shots) hit a stepback 3-pointer and found Dwight Howard moments later for a layup. With 2:19 left in the half, James made a 3-pointer that gave the Lakers a 14-point cushion.

But the Lakers couldn’t maintain that margin before the intermission. The Kings scored eight straight points to end the half, with the final four by Fox, whose fleet footed-game kept the Lakers’ defense on its heels all evening. Sacramento scored six more unanswered points to begin the third quarter, taking control of the game.

Westbrook had 12 rebounds and six assists against just one turnover, but the shooting slump was impossible to ignore. Toward the end of the third quarter, he pulled up early in the shot clock for a missed 3-point try, then turned the ball over – the mistakes led to five Sacramento points.

The Lakers have two days before their next game, against reigning league MVP Nikola Jokic and the Nuggets in Denver.

More to come on this story.

Who is benefitting from the Poland-Belarus border crisis? | Opinions

CBN governor Emefiele serving in my regime at most difficult time: Buhari

How should healthcare workers be protected from COVID-19?

Elon Musk aiming for a dozen Starship launches next year

Is colonialism to blame for dire situation with climate change?

Global food prices are at their highest in a decade: UN | Food News

The McBoat: The incredible German McDonald’s where customers have food delivered waterside