Nineteen years ago, Juliana Okoro was in labor and needed to be transported on a motorbike to a healthcare facility that is over four kilometres from her village, Ishiakpu, in Eha-Etiti, Nsukka Local Government Area of Enugu State.

The road was bad, the health care centre was far and the only means of mobility was the motorbike -therefore, Juliana who could no longer bear the pains of labour – gave birth to her daughters under the shade of cashew trees by the roadside.

“I gave birth to my twin daughters under a cashew tree. I was assisted by the okada man who was conveying me to the hospital, and some neighbors who came to our rescue,” she recalls.

“There was no health centre here then, and unfortunately till today. Without the grace of God, I wouldn’t have survived the induced labor. Many pregnant women still pass through the same ordeals today, with some fatalities. We need government assistance without further delay.”

Juliana’s daughters, Perpetual and Blessing, who have now finished secondary education and are waiting for a university admission say they are worried that nothing has changed about their community 19 years after, and have aspirations to bridge the infrastructural gap.

Perpetual said, “When I heard the circumstances surrounding our birth, I give God the glory. We survived by His Grace. We were born in a bush.

“I want to study medical rehabilitation. I want to improve the health of our people. We have no health centre across the entire Eha-Etiti. We also need road, and other basic social amenities. When I graduate, I will establish a health centre in my community and practice here, unless there is one or more by then. I don’t want anybody to pass through the ordeal we did during our birth.”

Her sister, Blessing, said, “I want to study accounting. When I grew up and heard where and how we were born, I felt challenged.

“I want to help my community as a testimony for our survival. It is a pity that nothing better has happened since our birth. The bad road in our community has not helped matters as we can’t convey our farm produce to market. The cost is high, so we end up consuming what we produce here.

“We thank Gov. Ifeanyi Ugwuanyi for the ongoing road construction across our area down to Isi-Uzo under the Rural Access Mobility Project, although our village is still far from the road. Our only means of movement is okada, and the charges are much.”

A Community Without Government’s Presence
Before the award of the ongoing construction of a rural road that passes through Eha-Etiti to Isi-Uzo Local Government Area under RAMP, farmers in the community, where cashew is the valued cash crop, only got-rock bottom prices for their crops.

It was hard for them to get to market, and merchants seldom ventured down the rough tracks that meandered towards the community through erosion-ravaged paths.

Chief Rommy Martins Odo, a community leader from Ugbele in Akwari, said since he was born 59 years ago, he had not seen anything done for the people of the area except the ongoing road construction that passes through the community.

“One would have expected the intervention of Nsukka Local Government Area at least, but I doubt if they function,” Odo said in response to a question about what the local authorities are doing. “I have not seen any impact of any Local Government authorities in this community since I was born.”

He paints a picture of a neglected community with no social services, such as education, health care and water.

“I appeal for two things for my people: water and a health centre. It takes an average woman about two hours on a motorcycle to access the nearest health centre located at Ama Ochime, which many allege do not always have the presence of medical personnel.”

However, it is hoped that the road under construction, when completed, will be the greatest facility the people of the area would have gotten from the government, as farmers’ incomes would significantly improve.

Other facilities available to villagers were done through communal efforts. 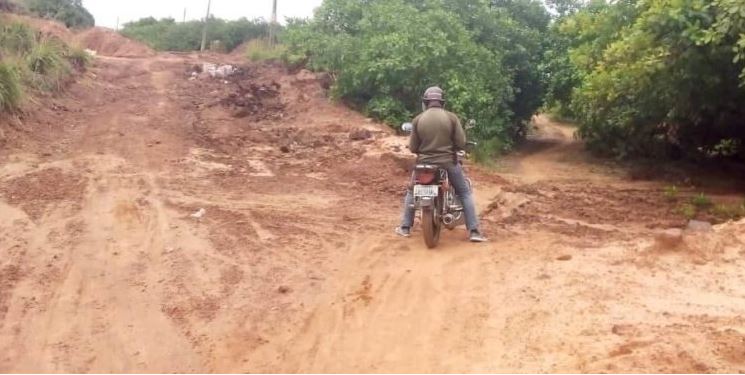 In their search for clean and safe water, there seems to be no hope in sight as the natives seem to have concluded that it has become a part of their unavoidable ordeals in life. They traverse bushes on a daily basis despite the risk of being attacked or abducted by marauding criminal herders for hours in search of water to drink.

The rich among them build underground tanks to preserve rain water during the rainy season not minding the attendant health and environmental hazards. Very few others, who water vendors can access their homes, buy surface tanks and pay exorbitantly for those tanks to be filled.

“All the six villages that make up the Eha-Etiti autonomous community have no access to potable water. It takes an average of three hours to fetch water from the nearest stream. Most people have resorted to digging underground water reservoirs. Only God knows how safe that option is,” Chief Odo said.

“This has been the practice since I was born. I will be 59 years old this June. Since I was born, it has remained the same water issue. So it is an inherent matter.
“The impact has been adverse. Those who can buy rubber tanks spend a lot. Half a tank of water here is about N5, 000 and a full tank is N10, 000. And I am referring to areas that can be accessed by water tankers. Some areas are not accessible, so their only option is the stream. And I’m referring to those living within the Ugbene axis.”

Sharing her experience on the problem of access to water in the community, Mrs. Bridget Odo, who is in her 80s, said, “If there is no rainfall, we don’t even have water to drink unless we go to the Vava stream.

“The distance is very far, and the road is isolated. We are also at the risk of Fulani herders who we come face-to-face on a daily basis.”

Often, the water they store in their underground reservoirs is not safe. “Not quite long, two snakes were killed inside my reservoir. Frogs also find their ways into them. Rodents are of the same story. We really need potable water,” the old lady said.

Many of the natives attest that the quality of the water in the storage is poor.

“It is not hygienic because rain waters are mixed with carbon IV oxide. It is dangerous to our health, and my people pay dearly for that. They suffer one sickness or the other as a result of this,” Chief Odo said.

Like many others in the community, he hopes that fortune will smile on Eha-Etiti when political office-holders look back to develop it as they often forget to return to fulfil their promises once elections are won. “We have appealed to the Governments at all levels, but no results yet. We keep hoping. Political office-holders come around during elections to canvas for votes, but once the elections are over, you don’t see them any longer.

“The first primary school we had was a community primary school until about two years ago when the State built one primary school through the Enugu State Universal Basic Education Board at Akwari and one at Amanato. That’s all.

“We mainly patronise private hospitals because Government hospitals are non-existent. We have the best species of cashew fruits, but can’t market them because of the cost implications. Our people are mainly agro-based, but they continue to live in squalor because they are landlocked by lack of access roads.

“But let us have potable water first before we die of water-related diseases. In some of the underground water reservoirs, snakes, frogs and all kinds of harmful organisms live there. My people will claim they don’t drink from there, but indeed they do.”

Another community leader, Ignatius Nnadi, called on public-spirited individuals, Government Agencies and organizations to come to their rescue.

He said, “Our streams are very far. We resorted to building underground tanks, though they are very expensive. They are for the rich.

“Governments should help us by providing us with water facilities. Boreholes can be dug for us. We also need other rural infrastructure to give meaning to our lives.

“We need health centres. We only have a functional health centre at Agbamere, which is very far. Eha-Etiti has none. We have a large expanse of land, which we are ready to release to the government to build social infrastructure in our place.

“We used to have a forest reserve but it has been abandoned. Our agricultural potentialities are not attractive because of the cost of making them available to selling points.”

For Elder Fidelis Nnaji, the oldest man in Ishiakpu Ugwuezegwu village, the story is the same. Elder Nnaji, in this encounter, used a kola nut to pray for divine interventions in solving their water scarcity problems.

He however acknowledged that the community benefited from the 5 million naira grant by the State Government meant for communities to embark on self-help projects of their choice. Nnaji said his people used the money to embark on the construction of a civic centre, which is still ongoing.

“Our greatest problem is lack of potable water. We are just living as an abandoned people. Every day, I appease our ancestors to send our lifetime demand for potable water to governments at all levels,” he said.

“Our only source of water takes over three hours’ journey to get there. We fetch water in wheelbarrows. Recently, cattle grazers have begun to pollute the water. It is called vava, a spring water.

“This also endangers our lives because such water won’t be hygienic, aside from the dangers of being bitten by poisonous creatures.

A water engineer, Mr. Okey Nriji, said constructing a borehole in the community is a veritable alternative if the stakeholders engage experts.

He said, “The first thing we do is to carry out a geological survey at the location to determine if water is there, and the depth of the borehole. With it, we quantify the cost of materials and the equipment, as well as the costs of drilling. The cost of the survey is cheap.”

This story was produced in partnership with Civic Media Lab under its Grassroots News Project with support from the National Endowment for Democracy.

NDDC Board: Community appeals to Buhari to consider Imo for MD position

FDA adviser who resigned over Alzheimer’s drug approval speaks out

‘A legend goes’: Marca and AS run with SAME headline after news of Ramos’ departure from Real Madrid

Award winning Chef, Edd Kimber will be at 2018 #GTBankFoodDrink Fair

Breaking! Boko Haram frees those in their captvity

2023 elections may not hold if Nigeria is destabilised, says UK official Pycroft

What you should eat when you are in your 30’s