The Flipkart listing of the upcoming INBook X1 series of laptops confirms that they will be sleek and lightweight devices measuring 16.3mm in thickness and will weigh around 1.48kg. The laptop is shown in various shades of red, green, and silver. They can be opened at a 180-degree horizontal angle, which adds an extra dimension to viewing the display from all angles. The listing also conveys that the laptops will come with an aircraft-grade aluminium finish and a full metal body. The page also says that they will be first in the segment, with a full metal body design, which means we could expect some aggressive pricing from the company. 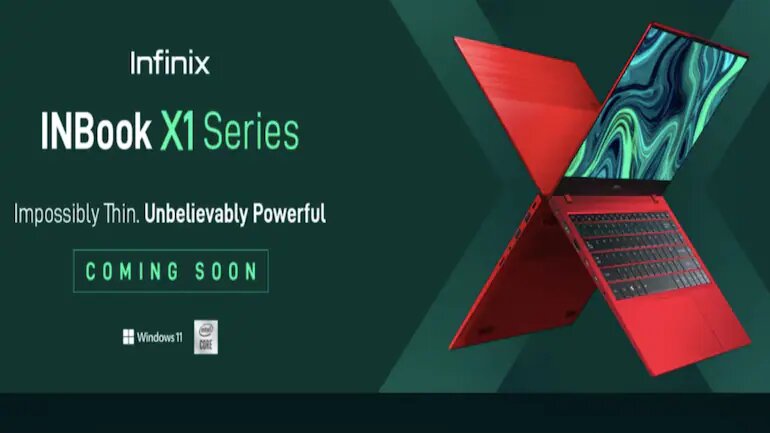 The Infinix INBook X1 series of notebooks come in three configurations of 10th gen Intel Core i3, i5, and i7 variants. They will sport a 14-inch IPS FHD display with up to 300 nits brightness. In the Philippines, the laptops come with 8GB/16GB RAM and 256GB/512 GB PCIe SSD storage options. But we don’t know which variant exactly India will get.

The Infinix INBook X1 Pro comes with a 55 Whr battery which has fast charging support of 65W. In terms of ports, the notebook comes with a USB Type C port, 2 x USB 3.0 ports, 1 x USB 2.0 port, an HDMI slot, an SD card slot, and a 3.5 mm headphone jack. Other notable features include a 720p HD camera, Bluetooth 5.1, DTS audio, and dual-band WiFi support.

The Infinix INBook X1, on the other hand, is powered by an Intel Core i3 10th gen processor paired with 8GB of DDR4 RAM, Intel UHD graphics, and 256GB PCIe SSD. The rest of the specifications is similar to the Pro version. It is still unclear which laptop model will the company launch in India, but the official teaser page on Flipkart hints towards the INBook X1 Pro.

The post Infinix INBook X1 series notebook launch for India confirmed; will be available on Flipkart first appeared on 91mobiles.com.

Woman in 2014 Bali suitcase murder to be freed early

PS5, Xbox Series bundles might be coming to GameStop today

We don’t want any Nigerian disenfranchised, says Gbajabiamila as Reps pass Bill on both electronic and manual transmissions of results

EPL: No team will like to play against them – Gary Neville names club to win title