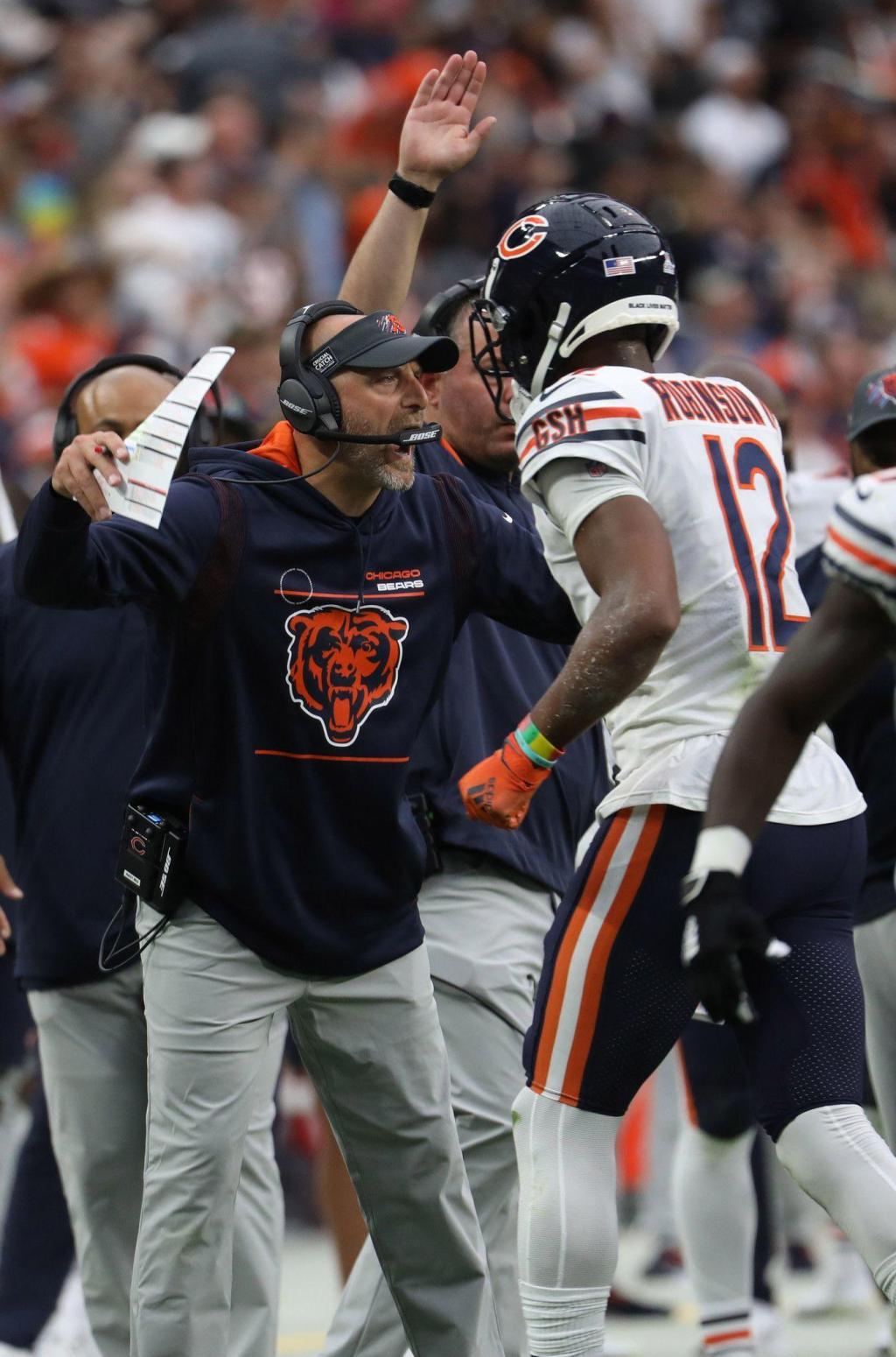 As performance art goes, George McCaskey’s one-man show Monday afternoon will be difficult to top in 2022.

Playing the role of finger-wagging corporate executive on a 59-minute video conference call with the media, McCaskey lambasted high school students for their “Fire Matt Nagy” chants at Nagy’s son’s football game, insinuated one-time All-Pro center Olin Kreutz was a liar, informed us his 99-year-old mother, Virginia, was “very, very disappointed” in the Bears’ season and wrapped things up with a halfhearted delivery of “Go Bearsss.”

Say what you will about the McCaskey family and its mismanagement of the Bears, but it has retained a staggering sense of self-confidence, at times bordering on arrogance, despite a glaring lack of success under its stewardship.

McCaskey’s news conference to explain the firings of general manager Ryan Pace and coach Matt Nagy was not televised, a shame in a town like Chicago that treasures its football and theater scene. But at least the Bears were kind enough to stream it on their Twitter app, perhaps knowing it would become an instant classic with baby boomers and TikTokkers alike.

And McCaskey did not disappoint. He was mildly combative and condescending while constantly “Bears-plaining” to a skeptical audience of fans who anxiously awaited Black Monday for months. He never changed facial expressions or raised his voice in anger or frustration, acting calm, cool and collected. If anyone creates a reality show featuring “Real Executives of Lake Forest,” look for McCaskey to be the star.

We’ve seen some classic news conferences in Chicago. Ex-Cubs reliever LaTroy Hawkins once called one in 2004 to announce he was not talking to the media. George’s brother, former Bears Chairman Mike McCaskey, was in charge in 1999 when the team issued a press release announcing Dave McGinnis was the next head coach — before McGinnis had agreed to it. “There was an announcement made obviously before we even agreed to any terms,” McGinnis said at an impromptu news conference at O’Hare. “And it went downhill from there.” McGinnis said he was hurt by “a lack of integrity in the process.”

Maybe George McCaskey’s news conference Monday to explain the firings won’t match that memorable debacle, but it should stand the test of time for his tour de force performance.

When you have only one news conference per year, you have plenty of time to rehearse your answers. The only question that stumped McCaskey came when someone asked if he was saying Kreutz lied when the popular former Bears center claimed the team once offered him $15 an hour to assist on offensive line coaching duties.

“Uh, that’s the way it is sometimes with Olin,” McCaskey replied after a long pause. “You don’t get the whole story, and Olin knows the stories.”

Kreutz was predictably upset and told the Tribune’s Brad Biggs as much Monday afternoon.

“I have always had a feeling maybe George doesn’t like me, and I confirmed that today,” Kreutz said. “That’s fine. I don’t worry about him not liking me.”

Kreutz probably was taking a hit for the rest of former Bears players-turned-media members, of which there are too many to mention. They all got under McCaskey’s skin and deserve at least partial credit for the sackings of Pace and Nagy.

Their criticisms of how the Bears operate have been loud and clear for the last couple of years and surely influenced fans who tune in to talk radio or postgame TV shows. Former Bears Ed O’Bradovich and Doug Buffone set the template on their postgame shows on WSCR-AM 670 back in the day, showing how it’s done. Buffone died in 2015, but O’Bradovich continues to eviscerate Bears management and the coaching gaffes weekly on WGN-AM 720, along with his outspoken partner, Hall of Famer Dan Hampton.

Kreutz, Lance Briggs, Alex Brown, Tom Waddle and Patrick Mannelly are among the other former Bears players who frequently have chosen to bite the hand that once fed them.

Take a bow, ex-Bears. Fans listened, and in the end, so did George McCaskey.

While many were mocking McCaskey on Twitter, he deserves some applause for his bold denials of reality. He still firmly believes in President Ted Phillips despite evidence of Phillips’s fingerprints on all the coaching and management decisions that haven’t panned out.

But McCaskey finally realized any self-respecting general manager the Bears were to hire wouldn’t take the job if he or she had to report directly to Phillips. So McCaskey wisely declared Phillips would be busy on the particulars concerning the potential Arlington Heights stadium site for the foreseeable future and confirmed the new GM would report only to him.

Cubs Chairman Tom Ricketts made a similar call in 2011, making Crane Kenney his president of business operations so Theo Epstein would come in from Boston and take over the baseball operations department without any interference.

Epstein reported only to Ricketts. Now all McCaskey must to do is find the Theo Epstein of NFL GMs, someone with a proven track record who can shake the franchise from its foundation and help turn the Bears into a winner.

It’s strange that McCaskey left Phillips on his GM search committee, but you have to believe it’s out of sheer loyalty and Phillips won’t truly be involved. Phillips’ only real job on the search committee is to say: “Nice pick, George.” Collaboration has its limits.

Now the search begins, and we might not hear from McCaskey again for another year.

We can hardly wait.

Do Kazakhstan’s protests signal an end to the Nazarbayev era? | Protests News

NBA season tips off today: Lakers, Clippers and what you need to know

Chicago Bears Q&A: How long will a rebuild take to become a playoff contender? Why didn’t the NFL flex Bears-Packers out of the Sunday night slot? How is the secondary faring?

The insane Bugatti Bolide hypercar is going into production

CNN shuts down its Australian Facebook pages after defamation ruling