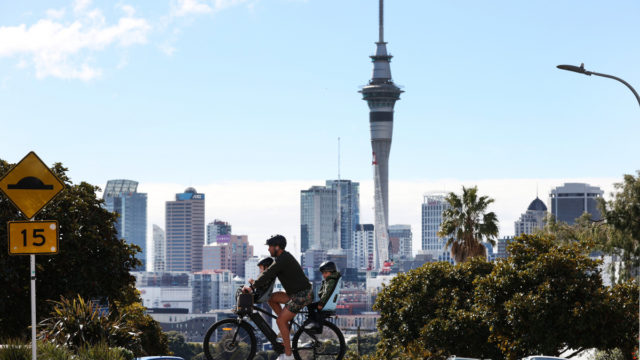 On Monday, Ms Ardern announced NZ would transition into a new phase of its fight against the coronavirus.

The fight is far from done: There were 24 new cases on Tuesday, including eight in the Waikato as the outbreak spreads south from Auckland.

Still, the government is moving on from elimination, set on restoring freedoms to Kiwis despite ongoing community transmission.

The first move is a small one.

But the signal it sends – that the government will tolerate cases in the community – has alarmed those most at risk.

“With every announcement that means that there’s more COVID in the community before people are vaccinated, we worry more,” Intensive Care Society spokesman Andrew Stapleton told Radio NZ.

“A lot of my colleagues are feeling the stress and anxiety of the outbreak as well as the constant pressure on the system.”

NZ has about half the ICU beds per capita of Australia, meaning it has much less capacity to care for virus patients.

Alarm bells are ringing among epidemiologists and outbreak modellers that the new phased approach, which will eventually allow shops and hospitality to operate, and for larger gatherings, will lead to further infections.

“The roadmap looks like a significant increase of risk for wider transmission, given that there is still ongoing community transmission with unlinked cases,” University of Auckland physicist Dion O’Neale said.

As of Monday, about 77 per cent of the eligible population was at least partially vaccinated, with 39 per cent double-jabbed.

Vaccination rates are lower still among Maori and Pacific communities, which make up about a fifth of NZ’s population, but abut four-fifths of the infected in this outbreak.

“It could be a death warrant for Maori and Pacific peoples, especially our young, unless the push to vaccinate takes hold,” Maori TV’s Whatitiri Te Wake wrote on Tuesday.

However, condemnation of the move is not universal.

Respected Maori doctor Rawiri Jansen said keeping Auckland in lockdown was necessary and the phased steps were “proportionate and compassionate.”

Still, the tide is overwhelmingly flowing against the Labour government, including business figures.

Ahead of Auckland’s 50th consecutive day in lockdown on Wednesday, Auckland business chamber chief executive Michael Barnett said the government was “not listening” to businesses “desperate for revenue, burdened with debt, short-changed in the financial support being offered”.

Mr Barnett also called on the government to mandate vaccination for public servants, as the US has done, and watch business follow.

In Wellington, meanwhile, Ms Ardern’s transition to an Australia-style roadmap has not won support from other parties.

Opposition leader Judith Collins said the announcement “wasn’t a plan, but a confused collection of gobbledygook”, while ACT leader David Seymour called it “a roadmap to nowhere”.

The post Another 24 cases, as NZ gives up on COVID-zero appeared first on The New Daily.

Dune director Denis Villeneuve on HBO Max and sequel: ‘It’s a crazy way to do things’

Qatar to ease COVID restrictions after drop in cases | News

Restore your individual cracked Nintendo Change: This is how I mounted mine

Andy Murray pleas for the return of his wedding ring